Priest of Bones is the first book in the new fantasy crime series War for the Rose Throne. 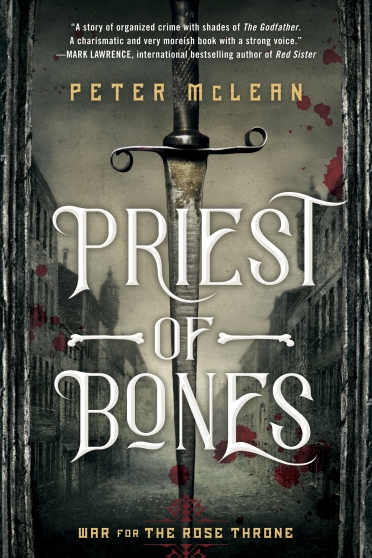 The first in a brand new dark and gritty epic fantasy series, where a crime boss comes home from the war only to find that his businesses have been stolen from him.

It’s a dangerous thing, to choose the lesser of two evils.

The war is over, and army priest Tomas Piety finally heads home with Lieutenant Bloody Anne at his side. When he arrives in the Stink, Tomas finds that his empire of crime has been stolen from him while at war. With his gang of Pious Men, Tomas will do whatever it takes to reclaim his businesses. But when he finds himself dragged into a web of political intrigue once again, and is forced to work in secret for the sinister Queen’s Men, everything gets more complicated.

When loyalties stretch to the breaking point and violence only leads to violence, when people have run out of food, and hope, and places to hide, do not be surprised if they have also run out of mercy. As the Pious Men fight shadowy foreign infiltrators in the backstreet taverns and gambling dens of Tomas’s old life it becomes clear; the war is not over.

It is only just beginning.

A charismatic and very more-ish book. A story of organised crime with shades of The Godfather. It sounds grim and dark . . . and it is . . . but our priest of bones is quite the humanitarian for a ruthless crime lord. With high-tempo action it’s just very fun to read — MARK LAWRENCE, author of Red Sister

An enjoyable read for lovers of small-scale fantasy, with a diverse cast of crooks. Priest of Bones can be effectively summarised as ‘gangsters in fantasyville’. McLean manages to combine two of my most liked elements in fantasy – a quick-moving plot, and characters with realistic relationships. Fans of Daniel Polansky’s Low Town books, Mark Lawrence’s Prince of Thorns or, dare I say, Blackwing will appreciate this book — ED McDONALD, author of Blackwing

Fresh and compelling . . . Mashing together soldiers, gangsters, magic and war into a heady mix that is a hulking big brother to The Lies of Locke Lamora, this is the first in an unmissable series — Anna Stephens, author of Godblind

Add it on Goodreads now! https://www.goodreads.com/book/show/37884491-priest-of-bones