Drake, book one of the Burned Man series, is published by Angry Robot 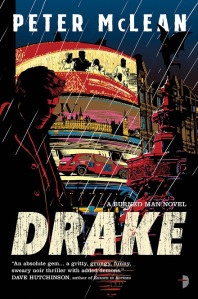 Hitman Don Drake owes a gambling debt to a demon. Forced to carry out one more assassination to clear his debt, Don unwittingly kills an innocent child and brings the Furies of Greek myth down upon himself.

Rescued by an almost-fallen angel called Trixie, Don and his magical accomplice The Burned Man, an imprisoned archdemon, are forced to deal with Lucifer himself whilst battling a powerful evil magician.

Now Don must foil Lucifer’s plan to complete Trixie’s fall and save her soul whilst preventing the Burned Man from breaking free from captivity and wreaking havoc on the entire world.

“Peter McLean’s debut novel is an absolute gem that hits the ground running,
a gritty, grungy, funny, sweary noir thriller with added demons. Don Drake is a
wonderful creation. You wouldn’t trust him with your life – he can’t even be trusted
with his own life. It’s a wonderful, headlong read and I enjoyed it immensely.
Very near the top of the half dozen best books I’ve read this year.”
Dave Hutchinson, author of Europe in Autumn and Europe in Winter

“Snarky, pacy and hellishly fun. Drake is just the sort of hero,
with just the sort of life, to make you feel good about yourself.
Dark and delightful, like a naughty treat, this is a rollicking story.”
Francis Knight, author of the Rojan Dizon series

“McLean has crafted a refreshing urban fantasy, with a wonderfully flawed, foul-mouthed protagonist who, despite some dubious life choices, is not quite beyond redemption. Imagine Mal Reynolds had dabbled in the occult and this would have been the result. Drake features equally complex female characters, ensuring the Burned Man is one series I shall be certain to follow.”
Susan Murray, author of The Waterborne Blade and Waterborne Exile